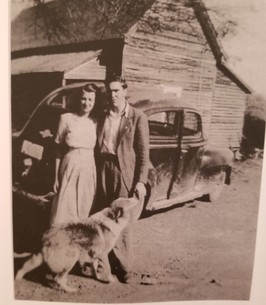 Mr. John Jefferson Rice, age 91 of Vanna Road, Royston, Ga., went to be with the Lord on Saturday, August 3, 2019 at his home surrounded by his family.

Born August 7, 1927 he was the son of the late Henry Harrison McElroy Rice and Essie Francis Bond Rice. Mr. Rice was a graduate of Emmanuel College and was a journeyman master carpenter and owner of Rice Construction Company. He was a member of Holly Springs Baptist Church where he was a former deacon, and he donated much of his time to construction of the church. Mr. Rice was a founder of Samuel Elbert Academy in Elberton, Ga. where he was a former coach. He loved gardening and witnessing to anyone that would listen and was an avid Georgia Bulldog Fan and enjoyed following the political world. He proudly served in the U.S. Navy during WWII.

Funeral services celebrating the life of John Rice will be held on Sunday, August 4, 2019 at four o'clock from the sanctuary of Holly Springs Baptist Church in Bowman, Ga. Rev. Kevin Vaughn, Rev. Zack Hawk and Dr. Chris Pritchett will officiate. Burial will follow in the church cemetery. The family will greet friends from 1-4 prior to the service in Holly Springs Baptist Church sanctuary.

The family will be at the home, 1910 Vanna Road in Royston.
Online condolences may be sent to the family by visiting www.coileandhallfd.com

Coile and Hall Funeral Directors, 333 E. Johnson Street in Hartwell will be serving the Rice family.
To order memorial trees or send flowers to the family in memory of John Jefferson "The Warden" Rice, please visit our flower store.