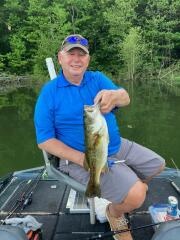 He was born on February 23, 1951, to the late Virgil Jackson Warren Jr. and Ruth Krebb Warren in Brooklyn, NY.

Mr. Warren was an Area Director and Manager for Captain D's and a truck driver before retirement. He loved fishing.

Cremation was chosen and a memorial service will be held at a later date.

To order memorial trees or send flowers to the family in memory of Gregory Warren, please visit our flower store.
Send a Sympathy Card