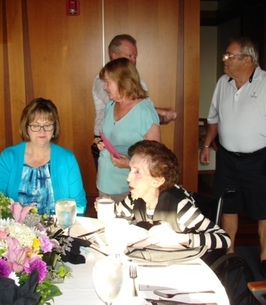 Gene E. Henson, age 96 of Hartwell, formerly of Lawrenceville, Georgia, died Thursday, September 16, 2021.
She is survived by her daughter Gena Cauthen (Randy), niece Vicki Walden (Bobby), and great-niece Amber Walden. She was preceded in death by her parents Jewell Smith Ethridge and Fred Golden Ethridge, her sisters Kathleen McGee and Irene Archer Hannah, and her beloved husband James Arthur Henson.
Gene was born on September 26, 1924 in Lawrenceville, Georgia, her favorite place in all the world. She graduated with honors from Lawrenceville High School in 1941 and was the first student to obtain employment through the business education department of the school. Her career was spent mostly in the legal field, and in 1965 she became administrator for the law firm Smith, Currie and Hancock in Atlanta, a post she held for 25 years. During this time she was influential in founding the Atlanta Association of Legal Executives (now Atlanta Association of Legal Administrators) and became the first president. Subsequently, she was elected to the national board of the association as Vice-President/Treasurer from 1979-1983. She also became the thirteenth president of the Atlanta chapter and became a lifetime member upon her retirement in 1990. In 2004, the Atlanta chapter honored Gene by establishing a foundation and creating an annual scholarship in her name to be awarded to a worthy student from the Atlanta area.
Upon retirement, Gene returned to school and received her diploma in Interior Design at Gwinnett Technical College. She was the Student of the Year for Design in 1991 and established her design business in 1992.
In addition to her professional life, Gene loved working in her community. She was a member of First Baptist Church of Lawrenceville and taught an adult Sunday school class for ten years. She served on boards of the Gwinnett Council for the Arts from 1993-1997; the Vines Botanical Gardens from 1993-1998; and The County Seat Players from 1993-2000, serving as Vice-President. She loved her time on the stage with the County Seat Players, a Lawrenceville drama group, acting in several plays.
Gene was listed in Who’s Who in America, Who’s Who in the World, Who’s Who of American Women and The World Who’s Who of Women.
In 2014 Gene reluctantly left Lawrenceville and moved to Hartwell to be with her daughter Gena and son-in-law Randy. She made many friends during her seven years there. Gena and Randy would like to thank the many people who stayed with her during their time away and who visited her and listened to her many life stories. Special thanks go to the caregivers at Cardinal Home Partners who made her life easier and showered her with love the last two years.
The family will receive visitors on Saturday, September 18 from 11 a.m. to noon at Coile and Hall Funeral Home in Hartwell and on Sunday, September 19 at 2 p.m. at Wages and Sons Funeral Home in Lawrenceville. The funeral service will follow at 3 p.m. on Sunday, September 19 at Wages and Sons in Lawrenceville. Please wear masks at all events and socially distance when possible.
In lieu of flowers, memorial donations may be made to The Gene Henson Scholarship Fund, AALA Foundation, P. O. Box 79019, Atlanta, Georgia 30357-2019.
To order memorial trees or send flowers to the family in memory of Gene E. Henson, please visit our flower store.
Send a Sympathy Card