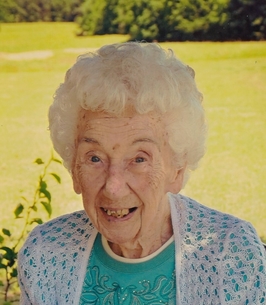 Doris Evelyn Clark Moorhead was born on December 13, 1922 the first and only child of John Henry Clark and Vinnie Irene Fain Clark. It was in the Fain homeplace where Doris was born and lived all her growing up years along with her step brother Howard James Clark and step sisters Nannie Ertzberger, Minnie Sue Heaton and Margaret Shirley. Doris remembers many good times with her family where everyone was just happy to be together. In 1928 Doris starts first grade at Air Line Elementary and was given the nickname Dink. She loved school and was a good student. She was always very small for her age with blonde almost white hair and the boys loved her., Doris continued thru the 9th grade and only missed one day in all her years of school. High school at Hartwell was good in the 10th and she started in the 11th but quit shortly after to marry her one and only real boyfriend, James Hubert Moorhead on September 24th, 1938. She was 15 and he was 18, Hubert and his father were cotton farmers but his father died and the newlyweds moved in the house with his mother. In 1940 they decided that Doris would get a job at a new company in Hartwell sewing. She was only 17 and you had to be 18 to be employed so Doris told a little white lie so she would get hired, On September 11,1943 a son was born to Doris and Hubert. Tony Marshall Moorhead their one and only child mainly because he cried a lot but later turned out good.. Doris worked for 48 years where she loved her job and her friends. Hubert and Doris in 1947 and were able to buy the home place where they began their life together years before. Tony grew up and married Lynda Ford and they built a house just a short distance up the road. Doris was able to be a big part in the growing up of Tonys three daughters Tonya Lee ( married to Greg Fleming), Tiffany Lynn (married to Ted Lovelace) and Talicia Lynley (married to Bryan Peeples), Hubert developed health issues in 1987 on February 17th passed away. Doris missed her sweetheart but as in years past was such a strong, loving Christian woman whos answer to any situation was Lets just pray about it Remarkable is a great word to describe her life, In 1998 she was hired by Wal-Mart as a greeter after the closing of the sewing plant. In 2008 she retired but still enjoyed life with a fun spirit and hearty laugh.
All three of her granddaughters married and built a house on land she and Pop gave them. She loved helping out with her great grands. Who made the Moorhead clan grow even more.
Deedra Osborne, Noah Osborne, Brittany Peeples, Bryson Peeples, T.J. Lovelace, Toby Lovelace and Kalen Fleming were of great joy to her. In 2016 Deedra marries Dillon Kotal and he become another grandson and they have a beautiful baby daughter in 2018 named Dawson Lynley. Who becomes the 5th generation to Doris. She does so much for her family so willingly and with a smile
December 13th she became 96 years young and so very loved by her family.
Sadly on February 11th 2019 she passes away with her family surrounding her. Still that same sweet and beautiful spirit that is admired by so many.
Her celebration of life will be on Friday February 15, 2019 at Coile-Hall Chapel, Hartwell GA. Visitation will be from 1 - 2 PM with service at 2. She will be laid to rest with her husband Hubert at Bethany Baptist Church Cemetery.. Memorials may be made in her memory to Gideons International, Hartwell Camp P.O. Box 59 Hartwell, Ga. 30643
Online condolences may be sent to the family by visiting www.coileandhallfd.com

To order memorial trees or send flowers to the family in memory of Doris Evelyn Moorhead (Clark), please visit our flower store.
Send a Sympathy Card