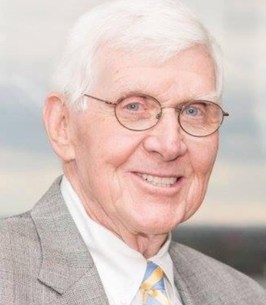 William Albert (Bill) Saye, Sr., a native Athenian and businessman, passed away at his home on September 10, at the age of 85. He was born at Athens Regional Hospital on June 9, 1934, to the late Emma Yarborough Saye and Robert Paul Saye, Sr.

Athens, Georgia was not only his birthplace, it was always “home” in his heart. His strongest friendships and community ties began in the Athens community from birth. As a boy, he played in a culvert, only to grow up and play football for Coach Wally Butts between the hedges of Sanford Stadium on top of that very same culvert.

Bill was also an avid Athens Y Camper. He first joined the YMCA at the age of five, and there he played football, basketball and baseball. He attended Athens Y Camp for many, many years as a camper, LIT, assistant leader, a leader, supervisor, and later as an assistant director.

He graduated from Athens High in 1953, and the University of Georgia in 1957. During his years at Athens High, Bill earned letters in football and baseball. He earned recognition as All-Region and All-State in football for three years. While at UGA, he was a member of Sigma Alpha Epsilon Fraternity and he was a three-year letterman in football under the Legendary Coach Wally Butts.

Upon graduation from UGA, Bill joined the Marine Corp in 1957, where he was an officer candidate at Quantico Virginia, and became a 1st Lieutenant at Camp Pendleton in California. He played for the Quantico marines and he coached the Camp Pendleton Marine’s Football Team. Upon leaving the Marine Corp he began his influential high school teaching and successful coaching career at Hart County High School where he was the head football and baseball coach for nine years. Bill retired from coaching in 1969 and moved his family to Atlanta where he worked for General Wholesale for 37 years.

Bill and his wife Margaret retired to Athens in 2006, where he fostered everlasting friendships with all generations and undertook significant roles in various organizations including The University of Georgia Letterman’s Club (Board of Directors), The Athens Touchdown Club, The Wally Boys Organization, and he volunteered weekly at Athens Reginal/Piedmont, where he received the Athens Regional Medical Center J. W. Fanning Humanitarian of the Year Award in 2013. He was inducted into the Athens Athletic Hall of Fame in 2006, and into the Georgia/Florida Football Hall of Fame in 2011. Bill rarely missed an opportunity to cheer on his beloved bulldogs at any and all sporting events including, football, baseball, women’s soccer, men and women’s basketball, and gymnastics.

There was never a shortage of activity and community involvement for this true Athenian, who watched the sun rise each day on his morning walks, and he always left a lasting smile on the faces of everyone he interacted with each day.

A private family burial will be at Bulldog Haven at a later date.
Courtesy of Coile and Hall Funeral Directors
To order memorial trees or send flowers to the family in memory of Bill Saye (Courtesy), please visit our flower store.